Synopsis: A dying billionaire sends one woman and a cast of dreamers and rivals on a citywide treasure hunt in this irresistible novel by the author of Bellweather Rhapsody.

Tuesday Mooney is a loner. She keeps to herself, begrudgingly socializes, and spends much of her time watching old Twin Peaks and X-Files DVDs. But when Vincent Pryce, Boston’s most eccentric billionaire, dies—leaving behind an epic treasure hunt through the city, with clues inspired by his hero, Edgar Allan Poe—Tuesday’s adventure finally begins.

Puzzle-loving Tuesday searches for clue after clue, joined by a ragtag crew: a wisecracking friend, an adoring teen neighbor, and a handsome, cagey young heir. The hunt tests their mettle, and with other teams from around the city also vying for the promised prize—a share of Pryce’s immense wealth—they must move quickly. Pryce’s clues can’t be cracked with sharp wit alone; the searchers must summon the courage to face painful ghosts from their pasts (some more vivid than others) and discover their most guarded desires and dreams.

A deliciously funny ode to imagination, overflowing with love letters to art, from The Westing Game to Madonna to the Knights of the Round Table, Tuesday Mooney Talks to Ghosts is the perfect read for thrill seekers, wanderers, word lovers, and anyone looking for an escape to the extraordinary.

When billionaire Vincent Pryce dies, he leaves a treasure hunt for his fortune that will take its participants through the city with clues to find this fortune influenced by Edgar Allan Poe. CreeeEEeeEEEEpy. Besides Tuesday, there are three other characters who are on this journey with her as well.  And what a group it is. Tuesday starts off as being a very closed off introvertive(that’s a word right??) character, but as her journey through the city commences, she begins to open up more. Dex, Tuesdays best friend, and Dorrie, Tuesdays neighbor,  as well as Archie, an unknown who is a reclusive millionaire, are joined together in this scavenger hunt. Although it goes from different points of views throughout, it was done in such a way that was not confusing whatsoever and really adds to the journey. I loved getting to know each one, but Tuesday was definitely my favorite. I too would rather watch TV than socialize.

Tuesday Mooney Talks To Ghosts was a fun, unique read for me. While the treasure hunt is a large focus of the story, we also get to see our characters go through some serious growth as they comes to terms with themselves; loss, grief, denial, and general flaws. There was plenty of twists and turns that will keep you guessing on every page what is going to happen. I am finding it hard to really summarize it all in a way that makes sense and doesn’t give any key parts away.  I’d say my only complaint was the pacing which is a big thing for me. It would be moving along fairly smoothly then just, not so smooth and I felt the ending was rushed along. Besides the pacing though I really did enjoy all that was going on.  I’m hoping for a book two??!

Recommended for fans of  pop culture references, lighthearted storytelling that has some dark, serious undertones, The Westing Game(obvs) and murder mysteries. I give this 4 out of 5 stars.

*E-arc provided in exchange for review. All thoughts and opinions are my own. Many thanks to Rockstar Book Tours and HMH Teen for including me on the tour! 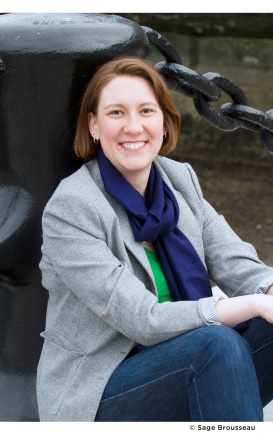 Kate Racculia is a novelist living in Bethlehem, Pennsylvania. She is the author of the novels This Must Be the Place and Bellweather Rhapsody, winner of the American Library Association’s Alex Award. Her third novel, Tuesday Mooney Talks to Ghosts, will be published by Houghton Mifflin Harcourt in 2019.

Kate was a teenage bassoonist in her hometown of Syracuse, and studied illustration, design, Jane Austen, and Canada at the University of Buffalo. She moved to Boston to get her MFA from Emerson College, and stuck around for 11 years. She has been a cartoonist, a planetarium operator, a movie and music reviewer, a coffee jerk, a bookseller, a designer, a finance marketing proposal writer, and a fundraising prospect researcher. She teaches online for Grub Street, works at her local public library, and sings in the oldest Bach choir in America.

3 winners will receive a finished copy of TUESDAY MOONEY TALKS TO GHOSTS,US Only.