July is chock-full of great new releases! Keep reading for some that I’m super pumped for. 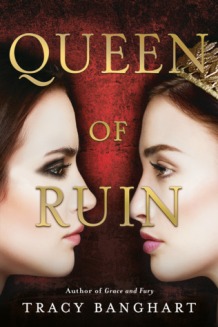 1)Queen of Ruin by Tracey Banghart ( Grace and Fury #2)

〉”Banished by Asa at the end of Grace and Fury, Nomi and Malachi find themselves powerless and headed towards their all-but-certain deaths. Now that Asa sits on the throne, he will stop at nothing to make sure Malachi never sets foot in the palace again. Their only hope is to find Nomi’s sister, Serina, on the prison island of Mount Ruin. But when Nomi and Malachi arrive, it is not the island of conquered, broken women that they expected. It is an island in the grip of revolution, and Serina–polite, submissive Serina–is its leader.

Betrayal, grief, and violence have changed both sisters, and the women of Mount Ruin have their sights set on revenge beyond the confines of their island prison. They plan to sweep across the entire kingdom, issuing in a new age of freedom for all. But first they’ll have to get rid of Asa, and only Nomi knows how.

Separated once again, this time by choice, Nomi and Serina must forge their own paths as they aim to tear down the world they know, and build something better in its place.

The stakes are higher and the battles bolder in Tracy Banghart’s unputdownable sequel to Grace and Fury.

〉”In the tropical kingdom of Rhodaire, magical, elemental Crows are part of every aspect of life…until the Illucian empire invades, destroying everything.

That terrible night has thrown Princess Anthia into a deep depression. Her sister Caliza is busy running the kingdom after their mother’s death, but all Thia can do is think of all she has lost.

But when Caliza is forced to agree to a marriage between Thia and the crown prince of Illucia, Thia is finally spurred into action. And after stumbling upon a hidden Crow egg in the rubble of a rookery, she and her sister devise a dangerous plan to hatch the egg in secret and get back what was taken from them.”

Fie abides by one rule: look after your own. Her Crow caste of undertakers and mercy-killers takes more abuse than coin, but when they’re called to collect royal dead, she’s hoping they’ll find the payout of a lifetime.

When Crown Prince Jasimir turns out to have faked his death, Fie’s ready to cut her losses—and perhaps his throat. But he offers a wager that she can’t refuse: protect him from a ruthless queen, and he’ll protect the Crows when he reigns.

Hawk warrior Tavin has always put Jas’s life before his, magically assuming the prince’s appearance and shadowing his every step. But what happens when Tavin begins to want something to call his own”

4. Spin The Dawn by Elizabeth Lim( The Blood of Stars #1)

〉”Maia Tamarin dreams of becoming the greatest tailor in the land, but as a girl, the best she can hope for is to marry well. When a royal messenger summons her ailing father, once a tailor of renown, to court, Maia poses as a boy and takes his place. She knows her life is forfeit if her secret is discovered, but she’ll take that risk to achieve her dream and save her family from ruin. There’s just one catch: Maia is one of twelve tailors vying for the job.

Backstabbing and lies run rampant as the tailors compete in challenges to prove their artistry and skill. Maia’s task is further complicated when she draws the attention of the court magician, Edan, whose piercing eyes seem to see straight through her disguise.

And nothing could have prepared her for the final challenge: to sew three magic gowns for the emperor’s reluctant bride-to-be, from the laughter of the sun, the tears of the moon, and the blood of stars. With this impossible task before her, she embarks on a journey to the far reaches of the kingdom, seeking the sun, the moon, and the stars, and finding more than she ever could have imagined.”

***SPOILERS POSSIBLY SINCE THIS IS BOOK 3***

〉”Unlikely alliances are forged and trust is shattered in the stunning conclusion to The Traitor’s Trilogy.

A new queen under threat.
An ambassador with a desperate scheme.
Two kingdoms with everything to lose.

Once a spy and counselor to the throne, Sage Fowler has secured victory for her kingdom at a terrible cost. Now an ambassador representing Demora, Sage is about to face her greatest challenge to avoid a war with a rival kingdom.

After an assassination attempt destroys the chance for peace, Sage and her fiancé Major Alex Quinn risk a dangerous plot to reveal the culprit. But the stakes are higher than ever, and in the game of traitors, betrayal is the only certainty.”

〉”Raised among the ruins of a conquered mountain nation, Maren dreams only of sharing a quiet life with her girlfriend Kaia—until the day Kaia is abducted by the Aurati, prophetic agents of the emperor, and forced to join their ranks. Desperate to save her, Maren hatches a plan to steal one of the emperor’s coveted dragons and storm the Aurati stronghold.

If Maren is to have any hope of succeeding, she must become an apprentice to the Aromatory—the emperor’s mysterious dragon trainer. But Maren is unprepared for the dangerous secrets she uncovers: rumors of a lost prince, a brewing rebellion, and a prophecy that threatens to shatter the empire itself. Not to mention the strange dreams she’s been having about a beast deep underground…

With time running out, can Maren survive long enough to rescue Kaia from impending death? Or could it be that Maren is destined for something greater than she could have ever imagined?”

7. Just my Luck by Jennifer Honeyburn

〉“Marty has terrible luck and she knows exactly why. While working as a housekeeper at the ritzy Grand Palms hotel in Maui, Marty made it a habit to steal small items from the guests. What better way to stick it to the rich snobs they have to clean up after? Marty knows how to turn her luck around — she just has to return all of the items she stole.

When Marty meets Will, a new guest who is staying for the summer, she does the one thing she always promised herself she’d never do — fall for an out-of-towner. But Will’s special, different from the other guests at the hotel. Maybe Marty’s luck is finally turning around.

After a string of misunderstandings and accidents threaten Will and Marty’s relationship, Marty has to find a way to fix her luck for good — or say goodbye to Will forever.”

The day Jerusalem falls, Miriam Elmahdy knows her life is over. Houses are burning, the streets run red with blood, and a traitorous army is massacring every last resident. There is no surviving this, especially not once Miriam catches the eye of War himself. But when the massive and terrifying horseman corners Miriam, he calls her his wife, and instead of killing her, he takes her back to his camp.

Now Miriam faces a terrifying future, one where she watches her world burn town by town, and the one man responsible for it all is her seemingly indestructible “husband”. But there’s another side to him, one that’s gentle and loving and dead set on winning her over, and she might not be strong enough to resist.

However, if there’s one thing Miriam has learned, it’s that love and war cannot coexist. And so she must make the ultimate choice: surrender to War and watch humankind fall, or sacrifice everything and stop him. “

RELEASE DATE: I DON’T KNOW YET SOMETIME IN JULY THOUGH

What July new releases are you excited for? Let me know in the comments!