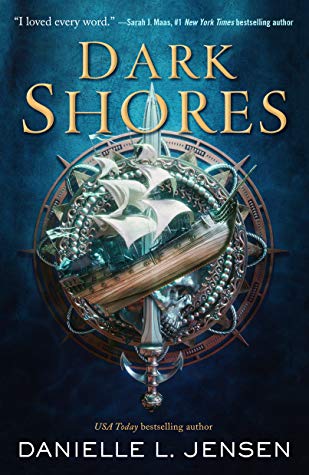 Synopsis: “In a world divided by meddlesome gods and treacherous oceans, only the Maarin possess the knowledge to cross the Endless Seas. But they have one mandate: East must never meet West.

A PIRATE WITH A WILL OF IRON

Teriana is the second mate of the Quincense and heir to the Maarin Triumvirate. Her people are born of the seas and the keepers of its secrets, but when her closest friend is forced into an unwanted betrothal, Teriana breaks her people’s mandate so her friend might escape—a choice with devastating consequences.

A SOLDIER WITH A SECRET

Marcus is the commander of the Thirty-Seventh, the notorious legion that has led the Celendor Empire to conquer the entire East. The legion is his family, but even they don’t know the truth he’s been hiding since childhood. It’s a secret he’ll do anything to protect, no matter how much it costs him – and the world.

When an Empire senator discovers the existence of the Dark Shores, he captures Teriana’s crew and threatens to reveal Marcus’s secret unless they sail in pursuit of conquest, forcing the two into an unlikely—and unwilling—alliance. They unite for the sake of their families, but both must decide how far they are willing to go, and how much they are willing to sacrifice.

Dark Shores follows the point of view of the two main characters, Teriana and Marcus. Teriana is the fierce Maarin pirate whose people hold an ancient secret of Gods and the whereabouts of the obscure lands known as the Dark Shores. The Maarin travel between the two worlds, the Celendor Empire and the Dark Shores, and guard the secret of each land with their life for if East meets West, war will be inevitable. But all that changes when Teriana spills the beans to her trusted friend. Word gets out to the senator of the Empire and the Maarin people soon finds themselves prisoners.  In order to save her people, Teriana comes to an agreement to help the Empire with the conquest of the Dark Shores.

In comes Marcus, the clever commander of the Thirty-Seventh legion and man of many secrets himself. When the secrets of his own are threatened to be revealed by the senator of Celendor, Marcus finds himself leading the journey to the Dark Shores with Teriana as his prisoner/informant.

‘”Its time for you to let go of the lies Mother Empire has whispered in your ears and start seeing the world for what it really is.”

“Inexplicable. Limitless.” Her gaze went back to the ocean. “Divine.”‘

Dark Shores was a fun, fast read that I found myself quickly engrossed in. The two worlds we get to explore were so different and yet the same in many respects. I enjoyed the spicy, slow-burn romance between our two main characters and getting to watch each of their character developments. My only complaint was the story gets quite a bit rushed as it comes to the end and I felt that it should’ve been, like, a hundred pages longer to work its way through the events that were happening. However, I am looking forward to book two and seeing where Teriana and Marcus’s journey leads AND hopefully getting to see some more cool Gods action.