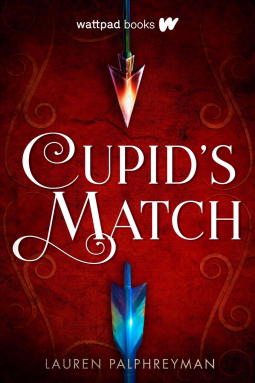 Synopsis: He’s mythologically hot, a little bit wicked, and almost 100% immortal. And he’ll hit you right in the heart . . .
“Miss Black, we have a big problem.”

Lila Black doesn’t believe in matchmaking, let alone soul mates. So then why is she constantly being hassled by the Cupids Matchmaking Service? But this gilded, cherub-bedecked dating agency isn’t exactly what it seems . . . and it’s about to turn Lila’s entire world upside down.

It turns out that Cupids Matchmaking is the real deal. As in, it’s run by actual cupids—who don’t look at all like they do in the paintings—and they have a serious problem with Lila’s “match.” Because this guy shouldn’t be in the system. He shouldn’t have a match. And while he’s irresistibly hot, he’s also incredibly dangerous. Because Lila’s true love match is Cupid. The original bad boy of love. And he wants her.

Now Lila’s once-normal teenaged world has exploded into a mythological nightmare overrun by crime-lord sirens, wrathful cupid hit men, magic arrows that cause no end of trouble, and a mischievous, not-so-angelic love god she can’t seem to stop herself from falling for . . .

When Lila won’t stop being pestered by Cupid’s Matchmaking Service she decides to take it upon herself to go directly to their office and let them know she does not want to receive emails and letters from them anymore. But when the receptionist takes a look at one of the letters she was sent, Lila finds herself being called down into one of the many offices to talk with someone higher up. Someone who is claiming to be a cupid and that Lila has been matched with the original, Cupid himself. Lila learns that a cupid is not allowed to be matched and her being the match for Cupid is very dangerous.

Warned to stay away from Cupid, Lila is sure that it will be no problem. But the next day at school, there’s a new guy. And his name is Cupid. And Lila realizes that avoiding her match might be easier said than done.

“Cupids cannot be matched. And we can’t watch over you forever.”

Cupids Match was a pretty easy read for me. It was full of lots of Greek Mythology references which was entertaining to read. However, I did have some problems with it. All the relationships seemed a bit forced (ahem, whats up with the whole Cal thing??) and I found it hard to connect to some of the characters. I also wish that Cupid and Lila’s whole relationship hadn’t been dragged out for so long. This was a very fun, unique take on the myth of Cupid I just wish that some tediously dragged out scenes were cut a bit shorter. I enjoyed the humorous narration of this and even laughed out loud a few times. Hopefully book two answers the questions that book one left me with. I am giving this 3 out of 5 stars.